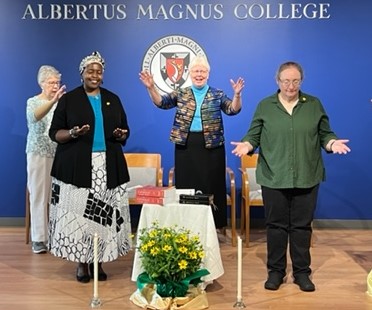 Shingai, a human resource professional recently based in Indianapolis, IN, chose to the Congregation headquartered in Columbus, OH. She holds a bachelor’s in Psychology from Cal Poly Pomona, Pomona, CA, a Master’s in Pastoral Studies from Loyola University Chicago, and a Master’s in human resource management from the Keller Graduate School of Management. She worked in human resource management for companies including Aramark Uniform Services and DeVry University before hearing God’s call to, as she says, “do more with the Catholic Church. All I knew for sure was that a big change was going to happen in my life in the future,” she says.

She took her human resources skills to the Archdiocese of Indianapolis, but even as she was working in and for the Church, she felt that something was missing. “Even though I could now be my full self in the workplace, openly praying with colleagues in meetings or attending Mass daily onsite, that integration did not fill this deeper longing I felt. Through lots of prayer, spiritual direction, and many hours in Adoration of the Blessed Sacrament, I started visiting communities in 2019. During the pandemic it became clearer that God was asking me to serve as a religious Sister and eventually to take the next step by applying for candidacy.”

Shingai found the Dominican Sisters of Peace through the Vision Vocation Network. She was impressed by the growing cultural diversity of the Congregation. Of the ten women in formation, four are from multicultural backgrounds. She shared that “Even in the discernment retreats, the Vocations team encourages us to pray in our native languages,” she says. “As a Black African woman, appreciation of cultural heritage is important to me, and it is wonderful to see it actually being lived.”

Shingai also admired how the Dominican Sisters of Peace look ahead to the future and adapt to the current state. She stated that, “The fact that seven Dominican congregations came together in 2009… shows me that they value the broader Dominican community and are not afraid to make changes in order to better serve the world.”

Shingai is the daughter of Lilian and the late Stan Chigwedere, of Harare, Zimbabwe. She has two sisters, Farai Chigwedere and Tendisai Chigwedere. Shingai was an active member of Christ the King in Lombard, IL and moved to the Dominican Sisters of Peace House of Welcome in New Haven, CT this spring. At the end of July, she will begin working in the Office of Dominican Mission, Campus Ministry and Meister Eckhart Center, at the Congregation’s post-secondary school, Albertus Magnus College, in New Haven, CT.

The Dominican Sisters of Peace have an active Vocations and Formation ministry, with four women candidates, two Sister novices and four having taken Temporary Vows.

To view a copy of her Entrance Ceremony program, click here.

Support the Dominican Sisters of Peace in their efforts to increase vocations to religious life!

Back to All Posts
Top