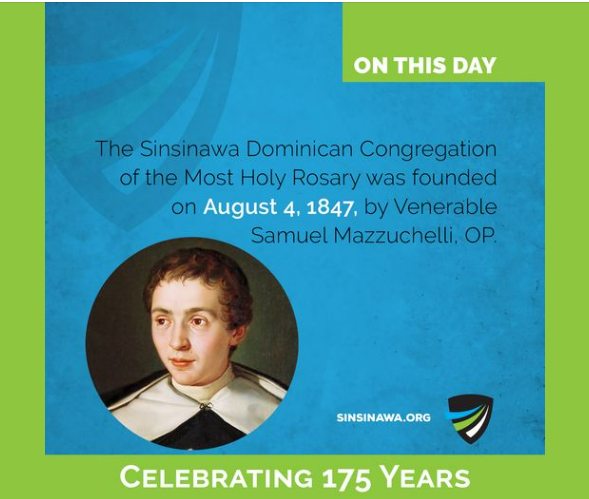 In 1847, two women responded to an invitation by Father Samuel Mazzuchelli, OP, and thus began the Sinsinawa Dominican Congregation of the Most Holy Rosary in southwest Wisconsin. Since that time, more than 3,400 women have made profession as Dominican Sisters of Sinsinawa and set out from Sinsinawa Mound to over 500 ministry locations in the United States and beyond to work in partnership with others to help build a holy and just Church and society. One hundred and seventy-five years later, the Sisters continue to preach and teach the Gospel in word and deed wherever they are called.

As part of the Congregation’s 175th-anniversary celebration, the Sisters will publicly release a 30-minute video In Good Company: The Dominican Sisters of Sinsinawaas a free, interactive premiere on YouTube Thurs., Aug. 11 at 6:30 p.m. (Central) at https://youtu.be/_gfhq0sb9VI.

The premiere event will feature a live chat and question-and-answer session beginning at 6 p.m. The video follows the Congregation from its inception when most Sisters were educators through its expansion in the 20th century when many Sisters moved into other fields of work to the current realities of Sisters continuing the mission during complex times. What makes a woman want to become a Catholic Sister? “It was the Sisters’ love for one another and the Dominican way of life that really drew me,” said Sister Priscilla Torres, OP. “We are all different. And yet when we come together, we are one collective, faithful group of women.”

Sisters continue to work for a more peaceful and just world by taking corporate stances as a Congregation to confront the evil of racism, mitigate the effects of climate change, support immigration reform, and call for an end to fracking, nuclear weapons production, the death penalty, gun violence, and human trafficking. As Sister Kaye Ashe, OP, stated, “The search—for self, for wisdom, for love, for truth, for justice, for God—is strenuous and unending. We need good companions in order to persevere in it. In good company, in a community of conviction, the quest never loses its relevance, its urgency, or its savor.”

The video was produced by Loras College Productions of Dubuque and partially funded by a grant from the Fred J Brunner Foundation. The Dominican Sisters of Sinsinawa are part of a worldwide Dominican family, the Order of Preachers. For more information, visit www.sinsinawa.org.

Back to All Posts
Top